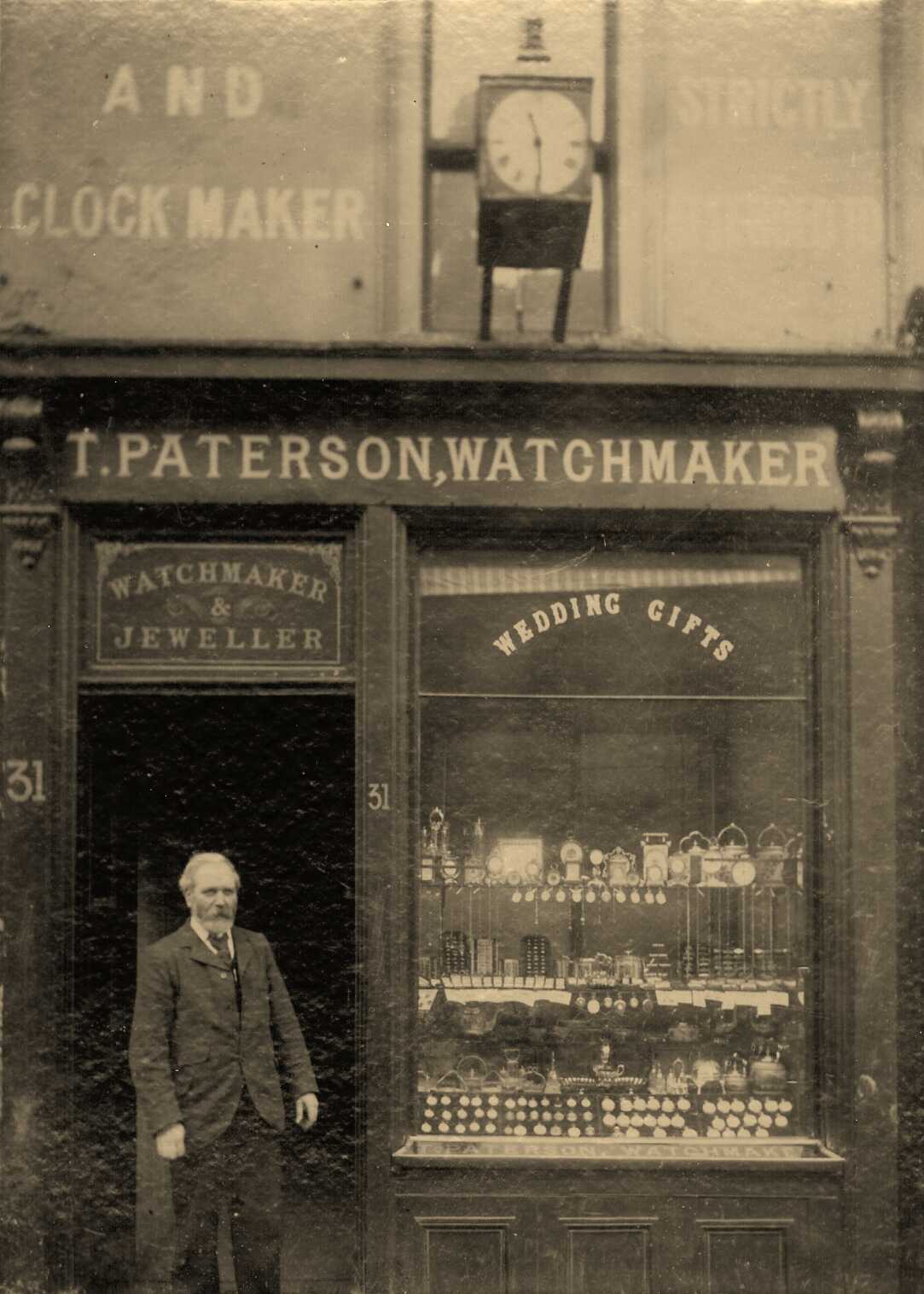 From 1832
Thomas Paterson trained as a watchmaker and set up his own workshop on Perth’s High Street. He soon needed larger premises, so he moved a little further up the street into our current shop, where he started selling watches, too. As business boomed, he expanded his range to include jewellery, clocks, silverware and wedding gifts.

The photograph, believed to have been taken in the 1870s, shows Thomas outside his shop. Closer inspection of the photograph shows pocket watches (wristwatches had not yet been invented), watch chains, rings, bar brooches, clocks and tea services. You may notice that it shows 31 High Street. We haven’t moved: the street was renumbered many years ago and we became number 37!

Three of Thomas’s sons later joined the business as watchmakers. More space was needed so the business purchased flats above the shop to increase the workshop space. There were now six watchmakers servicing watches and clocks, with trade work also being undertaken for other jewellers and watchmakers.

During the 1900s the business remained in the hands of Thomas’s descendants. Times were changing with the more convenient wristwatch largely replacing pocket watches. The business diversified further with one member of the family, Tom Paterson, qualifying as an optician and practising from the shop premises. Although this sounds rather unusual today, it was once quite common for jewellers and opticians to be interlinked.

Even today many customers still mention Tom, David and Crawford Paterson. We also still hear customers' memories of David and Bill who ran the shop together in later years. Indeed, David still pops in from time to time, though he is less active in the shop these days. His son, Derek, took the reigns in the early 2000s and still runs the shop to this day. 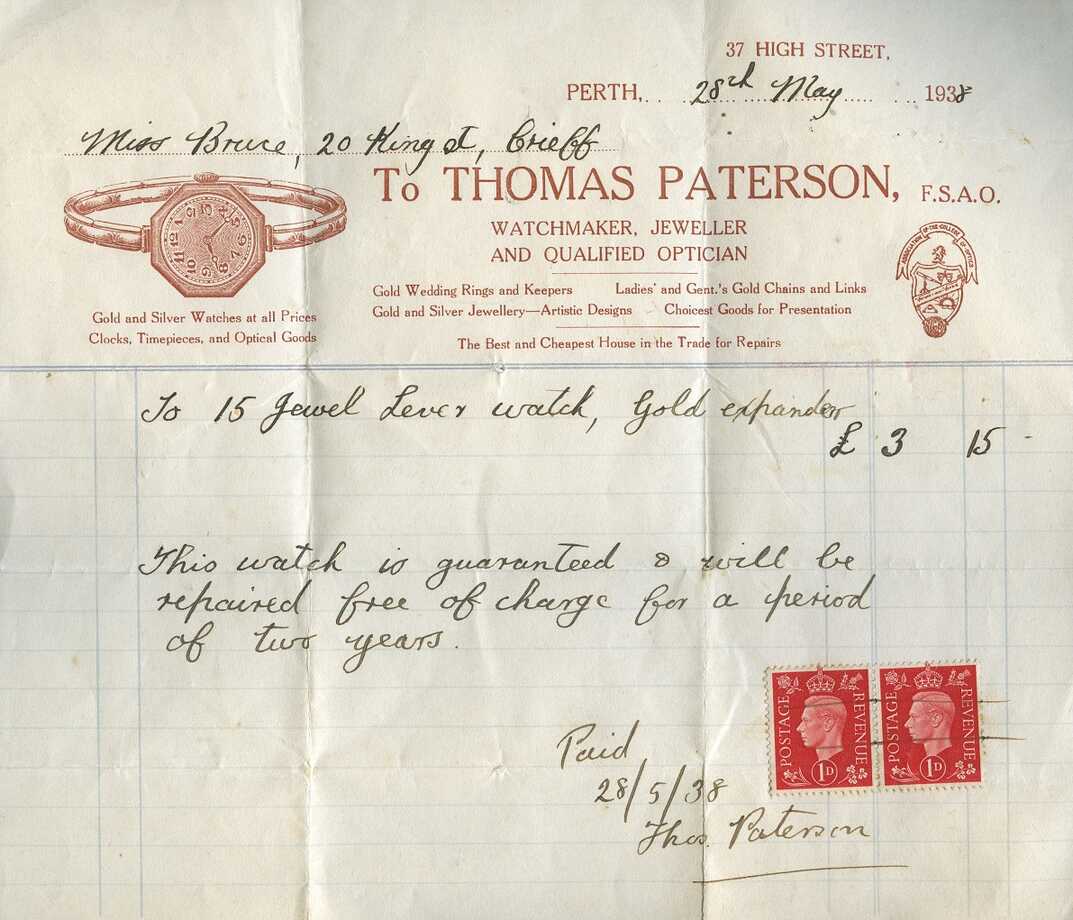 Modern Day
As possibly Scotland’s oldest family jeweller, T. Paterson has continued to thrive and is still run by the Paterson family to this day. While watch repairs are still carried out on the premises, most of the workshop space is now dedicated to the design and production of jewellery.

We expanded our shop in 2017 and, though the current shop incorporates Thomas's, it is now approximately four times the size it was previously. We took inspiration from our original shopfront for our expansion, and many of the original features have been recreated. We are very proud of our rich heritage and in 2003 received permission from the council to reinstate the clock above our shop, which had been taken down nearly 100 years before. This has become quite a feature of the city centre and is the only working clock on Perth’s High Street. We are delighted with our bigger premises and we finally have the space that Thomas Paterson and generations down the line dreamed of!

The shop is now owned by Managing Director Derek Paterson, Manager Claire Merson and senior team members Jane Lees and Megan Millar. Together we continue to hold the traditional values that our customers have come to expect over the generations, and strive to exceed every customer's expectations, both in store and online. 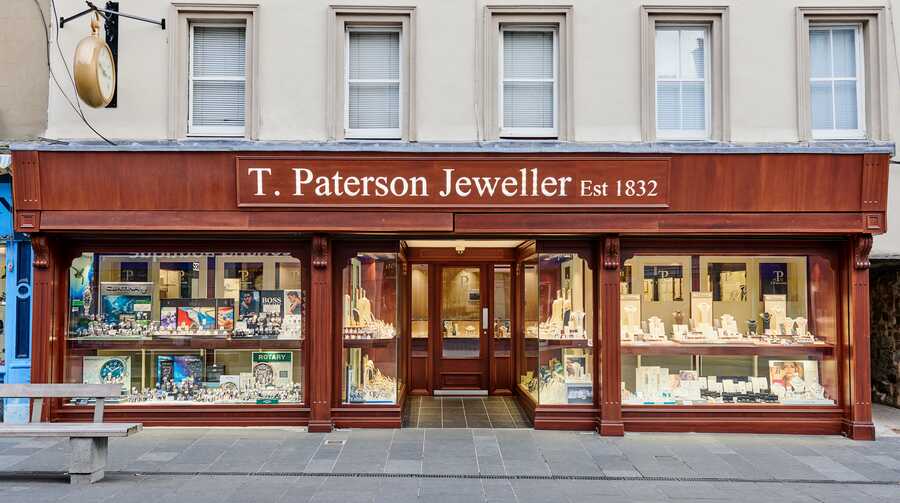